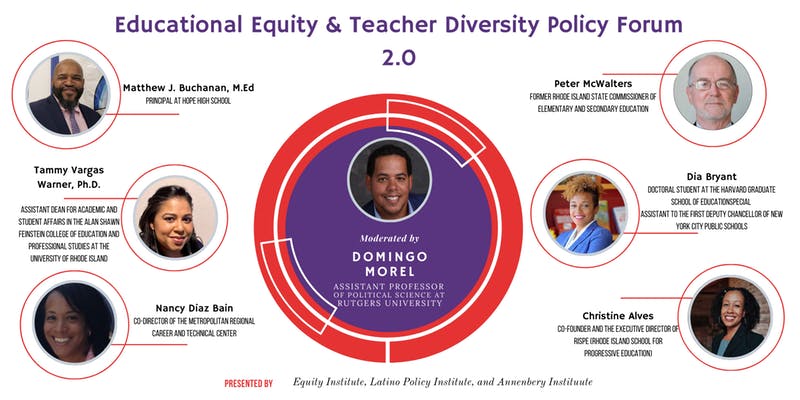 The forum will launch a year-long initiative to bring together community stakeholders, researchers, policymakers, equity advocates, educators and leaders to examine why Rhode Island ranks among the bottom in teacher diversity and discuss policies to address the shortage of teachers of color in the state.

The panel will be moderated by Domingo Morel who is an Assistant Professor of Political Science at Rutgers University, Newark. He is the author of Takeover: Race, Education, and American Democracy. He is also co-editor of Latino Mayors: Power and Political Change in the Postindustrial City. In addition to his scholarship, Dr. Morel has years of applied experience in education, political affairs, and public policy. He is a co-founder of the Latino Policy Institute at Roger Williams University and past president of the Rhode Island Latino Political Action Committee. He received his Ph.D. in political science from Brown University in 2014.

Our speakers represent diverse backgrounds and a wide range of experiences:

Matthew was recently named Principal at Hope High School. He was born and raised in Providence, RI and is a product of the Providence Public Schools. He grew up in Roger Williams Projects with his parents (Joan and Joseph), three older sisters and one older brother. At the tender age of 10 in 1986, Matt Buchanan was an innocent victim of a gunshot wound in his lower back. He awoke in the hospital bed with 75 stitches inside and 75 staples on the outside. This incident and second chance in life is one of the reasons why Mr. Buchanan is so passionate, energetic and dedicated because he was given another opportunity in life. He lives life vivaciously and advocates, educates, and mentors youth/students daily.

Dr. Warner is the assistant dean for academic and student affairs in the Alan Shawn Feinstein College of Education and Professional Studies at the University of Rhode Island. As the academic dean for undergraduate students, she oversees progression from admissions to degree completion for students enrolled in teacher education and professional studies programs. Dr. Warner also currently serves as the acting director for the school of professional and continuing studies. Located at the University’s Feinstein Providence Campus, the school focuses on degree programs for adult populations including working professionals. In this role, she oversees curriculum, faculty, and academic programs which focus around the areas of interdisciplinary studies, non-profit administration, and professional studies. With over 15 years of higher education experience and a passion for innovation and change, Dr. Warner’s professional interests focus on ways to improve pathways to degree completion for all college students and the ways in which systemic leadership plays a role on the organizational capacity for student success. As a critical quantitative scholar, her research interests include the role of racialized classroom environments, faculty interactions, and systemic inequities on success and outcome measures for students of color.

Dr. Warner received her Ph.D. in Higher Education from the University of Massachusetts Boston. She earned a B.S. and M.S. in Human Development from the University of Rhode Island. Prior to transitioning into higher education, Dr. Warner enjoyed a successful management career in the textile industry. In her leisure time, she enjoys mastering gluten-free cooking and baking for her husband and three children.

Nancy Diaz Bain, Co-Director of the Metropolitan Regional Career and Technical Center, was born and raised on the South Side of Providence, where she was one of six children. She graduated from Rhode Island College with a major in secondary education and the social sciences.

Nancy began to volunteer at the Met while in college after a chance meeting with Dennis Littky. After graduating in 1998 from RIC, she was hired as an Advisor. Upon graduating her students, she became a Principal in 2002. She returned to school herself earning a Master’s in School Administration from Cambridge College in 2003. Nancy rose to the position of Co-Director in 2006. In this role, she oversees the three campuses of the Met: the Public Street Campus located at 325 Public Street (South Side), the Peace Street Campus located at 362 Dexter Street (West End) of Providence, and the Paul W. Crowley Campus located at 115 Girard Avenue in Newport. Nancy oversees the day-to-day operations of the schools, helps Principals and Departmental Directors to collaborate with one another, and encourages students to succeed. Her passion is to lead the school so that staff and students are given every opportunity to excel. "My family wanted to give me a lot but they couldn't do so financially. The Met opens doors to a lot of students. I would have loved the opportunity to attend a school like ours when I was in high school, so I am energized by helping students be successful.”

Peter is currently a board member and chairman elect of the Big Picture Learning Board, a trustee of the National Center for the Improvement of Educational Assessment (NCIEA), and a consultant to Education Reimagined. A lifelong educator, Peter began his career in the Rochester Public Schools in New York, where he served in the roles of ESL teacher, social studies teacher, alternative middle school advisor and team leader, magnet school program planner, strategic planner, budget director, and labor/management collaborator. He then served as superintendent of City School District of Rochester, NY for six years. Subsequent to his superintendency, he became Commissioner of Elementary and Secondary Education for the state of Rhode Island (1992-2009), where he made significant gains in creating a better state-led system of education and partnered in founding the New England Common Assessment Program. Following his tenure as Rhode Island Commissioner, Peter joined the Council of Chief State School Officers’ (CCSSO) leadership team.

Having served in all of these roles, Peter’s expertise in education is extensive, drawing from significant contributions to school finance system reform; designing and implementing legislatively-motivated accountability systems; the improvement of education for students with disabilities; establishing grade-level content standards; leading the transition to individual professional improvement plans; and early childhood education advocacy. Previously held positions include President of the Council of Chief State School Officers; board member of the Nation Center for Education and the Economy; and member of the Council of Great City Schools.

Dia's commitment to urban education began as a New York City Teaching Fellow in 2004. She has over fifteen years of professional experience and has held multiple positions including teacher, math coach, new teacher trainer, and founding principal. Dia maintains a deep conviction that "all children can learn," provided that their environment is academically focused, emotionally supportive, diverse and physically safe. Dia Bryant believes that improving American classrooms requires a deep contextual understanding rooted in the history of the community and its people. She is committed to creating diverse and equitable learning environments for children, adults, families, and communities.

Dia earned her bachelor's in economics at Kalamazoo College, Kalamazoo, Michigan; a master's degree in Middle Childhood Mathematics, Brooklyn College, Brooklyn, NY; and a School Building Leader Certificate at the College of St. Rose, Albany, NY. Dia is currently a Doctoral student at the Harvard Graduate School of Education. While in her third year of the program, Dia is serving as the Special Assistant to the First Deputy Chancellor of New York City Public Schools. In her free time, Dia enjoys reading, following pop culture, and enjoying the company of her small children.

Christine Alves is a co-founder and the Executive Director of RISPE. She has been working on developing and launching RISPE since 2015. Christine has been an educator in Rhode Island for 19 years, having earned a BA in Biology and subsequently an MAT in Elementary Education, both at Brown University. Christine has been a classroom teacher, an instructional coach, a co-director of curriculum, and the director of a professional development organization. Her experience and expertise in the education field has been crucial to the success of RISPE's development and approval by the Rhode Island Department of Education and Council on Postsecondary Education.

As a former coach, Christine has a deep understanding of what experiences and challenges candidates need in order to grow into highly skilled, reflective, culturally competent practitioners, along with a keen eye for detail that ensures no aspect of programming is overlooked. She is also wholly committed to RISPE's mission to recruit and retain educators of color, and believes wholeheartedly that diversifying the teacher workforce is essential to improving outcomes for public school students. When she’s not at work, Christine loves spending time with her husband and children and traveling to visit family in New York, Maryland, Florida, and Trinidad.