Trump, the Administrative Presidency, and Federalism 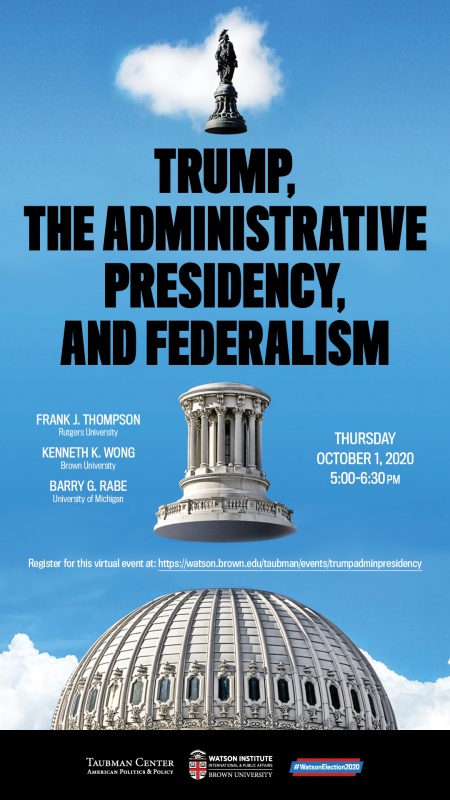 The authors of Trump, the Administrative Presidency, and Federalism will discuss their book, which shows how Donald Trump took unprecedented steps to undermine and otherwise reshape domestic policy programs through executive action. But the book also emphasizes how the forces of federalism, especially state attorneys general, governors, and legislatures, have often undercut Trump’s executive initiatives and reduced their impact on who gets what from government in the health care, climate, and education arenas.

Readers interested in the institutions of American democracy and the nation’s progress (or lack thereof) in dealing with pressing policy problems will find deep insights in this talk. These include careful examination of whether the states, in combination with the courts, can check the threat to the rule of law and democracy posed by an administrative presidency on steroids.

Frank J. Thompson is Board of Governors Distinguished Professor at the School of Public Affairs and Administration and the Center for State Health Policy at Rutgers University. He has published extensively on issues of health policy with particular attention to the impact of federalism. His most recent book is Medicaid Politics: Federalism, Policy Durability, and Health Reform. He is a Fellow of the National Academy of Public Administration.

Kenneth K. Wong is the Annenberg Professor of Educational Policy, Director of Urban Education Policy Program, and Professor of Political Science, Public Policy, and Urban Studies at Brown University. He has published several books on education policy, governance, and accountability, including The Education Mayor and Funding Public Schools: Politics and Policy.

Barry G. Rabe is the J. Ira and Nicki Harris Family Professor of Public Policy at the Gerald R. Ford School of Public Policy at the University of Michigan. He has received four research awards from the American Political Science Association and has published widely in the areas of environmental policy and federalism. Recent books include Can We Price Carbon?, Greenhouse Governance, and Statehouse and Greenhouse.